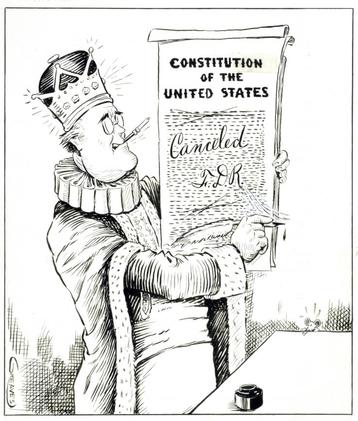 Despite his reelection landslide, Roosevelt's mainstream opponents gained steam in the latter part of the decade. Frustrated by a conservative Supreme Court overturning New Deal initiatives, FDR hatched a court packing scheme. He proposed that when a federal judge reached the age of seventy and failed to retire, the President could add an additional justice to the bench. This thinly veiled scheme would immediately enable him to appoint six justices to the high court.
​
Learn more about the criticism of Roosevelt's plans for judicial reorganization.